About the Investment Company Institute

The Investment Company Institute (ICI) has been a key institution in the securities markets since the first half of the 20th century.

The Investment Company Act of 1940

The Institute’s unique characteristics derive from its history. In 1940 Congress considered a bill drafted by the US Securities and Exchange Commission (SEC) that would have subjected funds to SEC regulation. Observers predicted that the fund industry would oppose the bill because it provided for stringent regulation.

The fund industry, however, supported the legislation and the prospect of a new, comprehensive regulatory framework, recognizing the importance of regulatory oversight in promoting the interests of those investors who would rely on funds for their financial well-being. Consequently, a joint SEC-fund industry committee worked together on the bill which was passed unanimously by both houses of Congress and signed into law by President Franklin Delano Roosevelt on August 23, 1940. Senator Sheridan Downey of California called this government-industry cooperation a “miracle.”

Creation of the Investment Company Institute

The ’40 Act required the SEC to adopt numerous rules and regulations. Given the complexity of the ’40 Act, the SEC wanted there to be an industry association to serve as a continuing liaison between the SEC and the fund industry. Therefore, on October 1, 1940, fund industry leaders formed the National Association of Investment Companies (NAIC). Its members consisted of mutual funds and closed-end funds. In 1961 membership was expanded to include the funds’ investment advisers and principal underwriters, and its name was changed to the Investment Company Institute.

From the outset fund industry leaders stressed the need for every investment company to participate in the association so that it could “speak with one voice” on behalf of the entire industry. This goal continues today as the ICI Board of Governors continues to be comprised of the leaders of the fund industry.

ICI always has viewed its principal mission to be working with the SEC and other regulators at home and abroad in the effective regulation of the funds industry in contrast to conventional assumptions that industry tries to avoid regulation. ICI has a long record of being a positive voice for regulation that protects investors, frequently expressing support for new legislation and SEC regulatory proposals. It has not been uncommon in its history when the ICI has suggested reforms that the SEC then later proposed and adopted.

In 2000, at an event celebrating the 60th anniversary of the ’40 Act, SEC Chairman Arthur Levitt acknowledged the many contributions of the ICI to the success of the US securities regulatory framework, stating:

Tonight is also a celebration of cooperation—of a truly remarkable and long-standing partnership between the SEC and the ICI. Over the years, investors have reaped the benefits of this special alliance as it has worked to promote the investor interest and preserve the public trust.

Over the years, ICI’s positive contributions to regulation have gone beyond its work with the SEC.

The Revenue Acts of 1936 and 1942 created a special tax regime for mutual funds and closed-end funds under which a fund is exempt from tax if it meets certain tests. The Institute was successful in obtaining legislation that modified these tests to meet modern conditions. In 1976 the Institute obtained legislation permitting the creation of tax-exempt municipal bond funds. ICI staff continue to work on a regular basis with the IRS and Treasury Department regarding issues involving the taxation of funds and their shareholders.

The Institute was active in the development of the major pension reform law, the Employee Retirement Income Security Act of 1974 (ERISA). The act created the first Individual Retirement Accounts, expanded amounts that may be contributed to self-employed retirement (Keogh) plans, and permitted plans of public schools and charities to invest in mutual funds. The act’s fiduciary provisions laid the groundwork for mutual funds’ success in the 401(k) market.

ICI’s record bears out the views expressed by the first head of the association, Paul Bartholet, in 1941:

In my judgment the regulatory act can ultimately be a constructive force in the improvement and development of the business, rather than a detriment. This assumes, however, that there is an honest and wholehearted attempt on the part of the industry to cooperate with the government in the administration of the statute.

ICI as a Research Institution 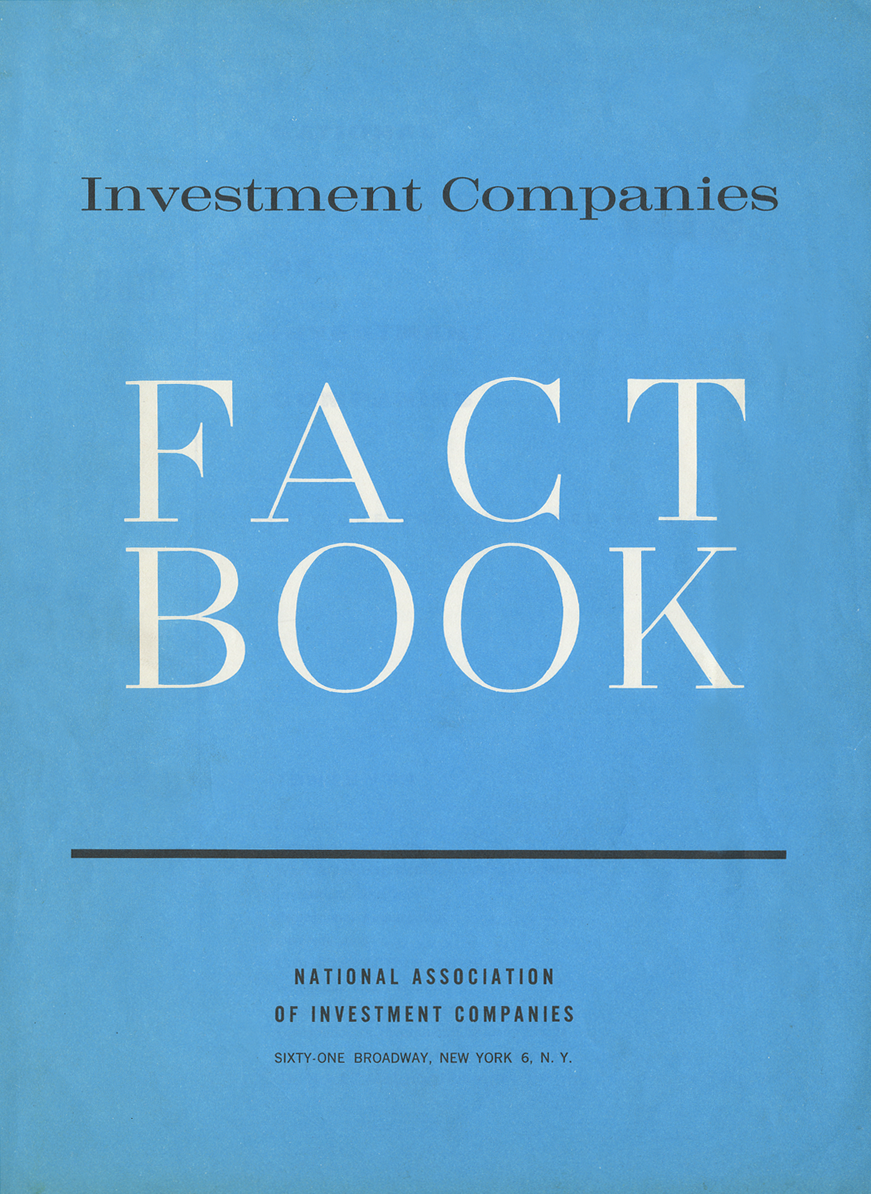 In the early years of ICI (when it was still called the NAIC) it became obvious that to represent the industry it needed up-to-date statistics about funds and their activities. Beginning in 1944 ICI began to collect data from members regarding matters such as the number of funds, fund complexes, and shareholders, and the amount of assets, sales, and redemptions. Today the Institute is the primary source for fund statistics used by the media, academics, and regulators including the SEC and the Federal Reserve Board. ICI statistics appear in monthly reports, and the annual ICI Fact Book which is referenced around the world. Following enactment of ERISA the Institute became the leading source for data regarding retirement plans.

The ICI research staff today consists of over forty research economists, data analysts and programming specialists who produce original research and publications on all aspects of the investment industry. They partner with leading academic institutions and public bodies, present papers, and produce analytical work to ensure ICI submissions to regulators and policymakers are supported by data and sound economic reasoning.

In 1969 when securities firms that distributed fund shares were having back office problems the Institute formed its Industry Operations Department to assist members in standardizing processes and procedures and creating efficiencies while managing back-office functions such as transfer agency and fund administration.

In 1987 the association created ICI Mutual Insurance Company to provide insurance uniquely suited to the needs of funds and their directors. Today, ICI Mutual is an independent insurance company that provides policy coverage for ICI members and associate members.

In 1989 the Institute formed the ICI Education Foundation to promote financial literacy programs and to increase the public’s awareness and understanding of the benefits of investing. The Foundation organized national investor education workshops in partnership with the National Urban League and Hispanic College Fund. More recently it has worked with the Robert Toigo Foundation and Girls Who Invest to support career advancement and increased leadership of underrepresented talent in finance and Junior Achievement of Greater Washington, DC to promote financial literacy among secondary school students.

Over the years, ICI recognized the important role played by independent directors and trustees in safeguarding shareholders’ interests. In 1995, ICI established a committee that focused on educational programs and resources for independent directors. As interest in fund governance grew, ICI recognized the need for an organization dedicated to serving fund independent directors—and launched the Independent Directors Council (IDC) with dedicated staff in 2004. Through its mission focused on education, engagement, advocacy, and public understanding, IDC promotes excellence in fund governance for the benefit of fund shareholders.

In 2011, ICI launched ICI Global to serve as the voice of regulated investment fund managers who were increasingly operating global businesses and active in multiple regulatory jurisdictions. ICI Global began in London and Washington and eventually added offices in Hong Kong and Brussels where ICI Global staff engage regulators and policymakers across Europe and Asia and participated in international fora like the Financial Stability Board (FSB) and International Organization of Securities Commissions (IOSCO).

As discussed above, the Institute’s activities have increased dramatically since 1940.

Over the same period membership in the association has expanded from mutual funds and closed-end funds to include fixed unit investment trusts, exchange-traded funds, and foreign funds. Most recently, ICI has begun working with its members who also maintain collective investment trusts and separately managed accounts. Most of the original member funds were sponsored by firms that only managed funds, with a few sponsors also managing accounts of wealthy individuals. Over the years insurance companies, securities firms, and commercial banks have entered the fund business.

In 2022, reflecting on the broadening of the Institute’s activities, the ICI Board of Governors announced a restatement of the ICI mission:

To strengthen the foundation of the asset management industry for the ultimate benefit of the long-term individual investor.

Many individuals have contributed to the Institute’s success, and ICI has always had the most senior leaders of the investment industry serve on its Board of Governors and participate in its work. The key to the Institute’s success, however, has been the work of thousands of people in the fund industry who have acted in accordance with Paul Bartholet’s sage advice in 1942:

Those of us to whom regulation applies must consider it not only a privilege but an important duty to help make it work. It is here to stay. We had better adjust ourselves accordingly. Let those who complain about the ruinous effects of regulation and its arbitrary and biased administration look instead for its advantages, seek to capitalize on its benefits, and try to cure its defects.